As I thought about my post on the tea party of the 4th., I realized I didn't write down all my observations. So here are a few more with some added pictures. It can safely be said that everyone there was willing to participate in some kind of activism however modest. I consider that a very good sign. But there were some who wanted a more agressive activism. One wanted recall campaigns to be started to oust those in office. A few others called for more petitions to be circulated to stop the government spending and intrusion into our lives.

Quite a few people expressed frustration in not being able to do more than just protest at parties like this one. That's when I gave them a copy of two press releases from ARC on the sales of Atlas Shrugged. One release reported that most large bookstores will have floor-displays of Atlas after the 4th. The other release notified that the sales of Atlas have tripled in the first 4 months of 09. My intent was to say or imply 'This is where a lot of people are looking for answers, you should too.' It became obvious to me that a tea party is no place for education or debating. But it can be a good place for guidance toward a certain path. Before people can see the truth, they must be encouraged to look at it. Now a few more pictures. 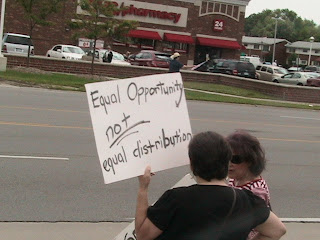 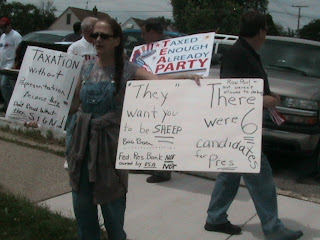 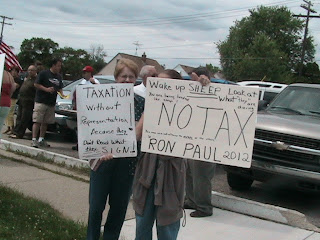 Thanks for posting this Mike! I really like your observations, and I hope that the other protesters learn from all you handed out. Great job!

There's no doubt now. The government needs to be removed from the economy.

Today every thing is regulated by government and everything is collapsing. Do you see a connection there? I sure do. Everything the govern...